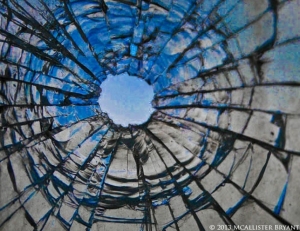 The common theme of much of the gun enthusiast community is that they want unfettered access to any and all guns to 1) protect their family/home, 2) fight tyranny [so far extremely undefined] and 3) defend against marauding hordes in a time of social unrest.

This brings us to the events of last two weeks in Colorado and Texas. On March 20th the Executive Director of Colorado Prisons, Tom Clements was gunned down at his front door. It would be expected, considering his job that he was armed, or at least had a firearm in his home.

Days later the suspect shot a Deputy Sheriff in Texas, minutes before he was fatally injured during a car chase in Northern Texas. The gun in his possession was traced back to the gun that killed Colorado prison chief Clements. That gun, a Smith & Wesson 9mm semi-automatic had been purchased through a strawman buyer two weeks before Clements was killed. The suspect was a member of the Aryan Brotherhood of Texas. 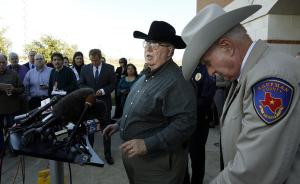 On January 31, in Kaufman, Texas Assistant District Attorney Mark E. Hasse, 57, was gunned down in the employee parking lot of the Kaufman County Courthouse by two men wearing tactical vests. He was working on a major case against the Aryan Brotherhood of Texas. He was armed and expecting trouble.

On March 30, Kaufman District Attorney Mike McLelland and his wife were gunned down in their home by assassins with an AR-15 rifle. The 20+ shots killed the District Attorney who had 23 years of military training, weapons in his home and, after his ADA was killed less than two months earlier was expecting trouble. 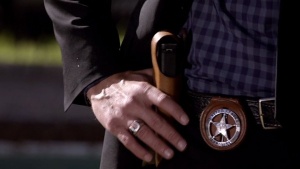 Three days later, April 2nd the Federal prosecutor in Dallas who had been working on the Aryan Brotherhood of Texas case walked away from the job for “security” reasons. This prosecutor had available the blanket of security of the US Marshal’s service to protect him. He did not feel safe.

The cases are being investigated by the FBI, Homeland Security, US Marshal Service, Texas Rangers, Texas State Police [DPS], Kaufman County Sheriff’s Office and other agencies. The focus at this time is on the Aryan Brotherhood of Texas but consideration is still being given to other possible groups.

And that brings us back to marauding hordes. If anything defines civil unrest by an armed group, this last few months do. A highly armed criminal enterprise that apparently is fearless to the repercussions of killing cops and district attorneys. When we realistically look at defending against a marauding horde and home invasion…it seems there is a perception that the “good guy with the gun” will, as he does in the movies stop the “bad guy with a gun”. In three very clear instances, the victims did not stand a chance. They were armed, prepared and by all indications trained to protect themselves and their family. All for naught.

Just days later the Federal Prosecutor, with a cadre of armed agents of the US Marshal’s Service and other agencies made the decision to walk away instead of face that threat.

The point…gun enthusiasts say that they need an unlimited arsenal to protect the home, the homestead and society. Yet history has shown that it just doesn’t work that way. Folks who are on alert, who are expecting danger still can’t stop it…the illusion that is given by gun enthusiasts is that somehow “they would”. It is a dangerous illusion.