NRA Has Congress by the Balls… America Pays with Blood 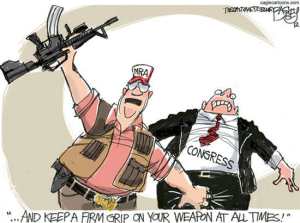 Put simply…Wayne LaPierre doesn’t give a damn about enforcement of old laws or introducing new laws to stop slaughter…he and the NRA are too busy passing out checks to Congress that support his lobbying efforts for the gun industry.

Besides their current battle plan to stop each and every new regulation before it even has time to see the floor of Congress [see Assault Weapons Ban legislation], the much more insidious plan has been taking place for years, little earmarks tucked into other bills that neuter government’s ability to enforce current gun laws. It directly enforces the NRA’s singular mission…to help the gun industry sell as many guns as possible with as little interference from pesky “laws” as possible. And Congress plays along, awaiting their check or fearing the “wrath” of an easily duped NRA membership.

So how does the NRA do it? As the Center for American Progress shows, they buy favored legislation without it ever, even once having a hearing, being heard in committee or on the floor of the House or Senate? Earmarks or at least the legislative version of them. But instead of being a rider to pave a donor’s marina parking lot under the guise of Homeland Security requirements [as Hal Rogers [R-KY] did…it is a little bill attached to an important bill such as a “must pass” appropriations bill.

And that is just what happened in May of 2012 when the Appropriations bill for Commerce and Justice for FY2013 came through. Included in it was an section that prohibited the ATF from requiring firearms dealers in states on the Mexican border to report the sale of multiple rifles or shotguns to a single individual, a noted strawman purchase. This ATF policy that was being targeted was a new policy to assist law enforcement fighting illegal gun trafficking along the border with Mexico. This happened at the same time Republicans and the NRA were pillorying the Obama administration for Fast and Furious.
HR5326, SEC. 219. None of the funds made available by this Act may be used to require a person licensed [gun shop]under section 923 of title 18, United States Code, to report information to the Department of Justice regarding the sale of multiple rifles or shotguns to the same person.

One of the requirements for any systematic analysis tools that allow the ATF to manage the tracking of stolen weapons, straw buyers and illegal purchases is a sound database of information. It seems simple…but the NRA has spent years stopping the ATF from enforcing laws that require record keeping, bringing what records the ATF does have into 21st Century technology and having an ability for law enforcement to use the data to catch the very criminals that the NRA says are the ones that should be held accountable.

The NRA handcuffs the ATF and law enforcement with riders in Appropriations bills that keep ATF from computerizing their files…leading to warehouses full of paper documents. [For the fiscally conservative right…this is how your tax dollars are being spent…long man hours to investigate files on paper that should be on-line]. Since 1979 the ATF has not had the legal ability to consolidate information into a database for law enforcement.

In 2004 a rider was tucked into the Justice Appropriations bill that prohibits the Department of Justice from disclosing “trace” data, that all important information that can link criminal to gun to dealer to manufacture. And the NRA complains loudly that the Administration is not prosecuting criminals for gun crimes…now you know why.

One of the primary functions of the ATF is inspecting the 60,000 federally licensed gun dealers in the United States. They are hampered from doing this by funding restraints and by riders in the Appropriations bills. Note the recurring theme.

Again in 2004 [when the White House and both houses of Congress were Republican] a rider was placed into the funding bill that restricted the ATF’s ability to conduct inventories of gun dealers. Put simply the ATF was handcuffed from performing a core function to insure that guns that came in the door of gun shops when out the door with proper paperwork.

In 2011 inspections found 18,500 guns were missing in the limited inventory inspections of just 13,000 dealers that the ATF is able to accomplish. One of the guns used by John Allen Mohammed in the 2003 Beltway Sniper attacks that killed 10 was such a “stolen” weapon from a gun shop…a Bushmaster XM-15. Sound familiar?

When it comes to gun violence, and determining appropriate solutions to reduce its impact on American society is good, sound research into all the variables that go into the violence so that resources can be called to bear on those factors that are the most significant. But yet another rider…this one over several years explicitly defunded the Centers for Disease Control as they tried to study gun violence, tried to define the important links. This may have backfired on the NRA this year as detailed studies may have shown that there is not a link between assault rifles and significant gun violence. But we won’t know because unbiased research was halted.

All of these boil down to a couple of very significant facts. The NRA has, for 30 years attempted to neuter all attempts by government to solve gun violence, they have attempted to neuter the “thousands of laws already on the books” that they insist should be fully enforced before any new laws are considered. They have stopped inspections, stopped enforcement and they have stopped research…all for the very simple reason of profit for the gun manufacturers that give them millions of dollars each year to do their bidding.

When the subject comes up that there is “a price for freedom”…that price is measured by monies spent by the NRA to enhance the profits of their clients and by the number of bodies that pile up year after year while the NRA shamelessly looks away.

McAllister is a life long liberal, environmentalist, Eagle Scout, and even gun owner – born in Harlan, Kentucky and has lived in Southern California, New York City and now resided in Lexington, Kentucky as a Systems Analyst.