Today is the 5,000th day since Columbine High School erupted in violence and murder and 13 innocent children were killed, another 21 injured. As well, the two shooters, aged 18 and 17. 5,000 days, nearly 14 years have passed. Today is also the day the US Senate is taking up the subject of “What Should America Do About Gun Violence?”

In the nearly 14 years since Columbine we have had 157,500 murders by gun. 32,000 of those were gang related where most were using stolen guns or guns illegally purchased.  125,500 were NOT gang related [numbers from FBI Uniform Crime Reports]. 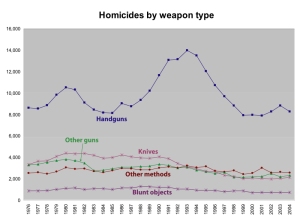 As you can see from the FBI chart, a definite, well defined drop came after the Assault Weapons Ban in 1994

Since Columbine we have had seven multiple murder school shootings in Red Lake High School, Virginia Tech, Northern Illinois University, Bart Township, PA, Chardon High School, Oikos University, and Sandy Hook Elementary School. In every school shooting except Bart Township, Chardon and Sandy Hook there were armed, trained guards on the scene, as there was in Columbine. 103 Killed – 96 Wounded.

In that same 14 years over 84 Million guns have been sold in the US according to the BATFE’s NICS background check system.  We also know that between 3.5Million and 5Million guns have been stolen in that same period. And through SourceWatch we know that the NRA has spend over $50Million in lobbying and election contributions, $24.28Million – $16.83Million through its Political Action Committee, plus $7.45 million through its affiliated Institute for Legislative Action during the 2012 election cycle alone, along with another $2,205,000 in lobby action alone.

McAllister is a life long liberal, environmentalist, Eagle Scout, and even gun owner – born in Harlan, Kentucky and has lived in Southern California, New York City and now resided in Lexington, Kentucky as a Systems Analyst. His grandfathers helped organize the coal fields of Eastern Kentucky and his father was a career long butcher and union representative.